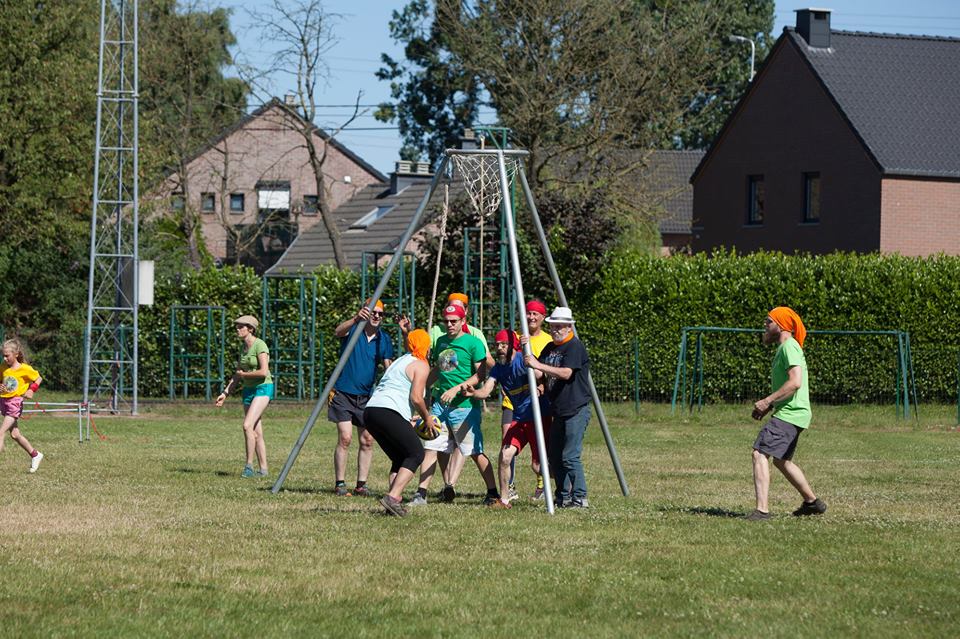 The Ball-Barr game rules may vary according to the situation and environment. This is why we decided to establish the following specific rules for the 70th anniversary’s tournament of next July 1st2018. We copy it here so everyone will be able to train, preparing to the next Ball-Barr tournament. The Belgian federation decided, during the biannual General Meeting, to organize such tournament once a year.

In order to enable everyone to take part to the same game, whatever their age and physical skills, each team will be a mix of people, one from each colour code (a red, a green, a blue, a yellow and a white one), according to the registrations. A random drawing will be done for each color code, on July 1stat 2:00 PM. Registrations are open until then.

The match will be played by « mixed » teams, which is in full compliance with what Pierre Barron (The inventor of the game) called : les “rencontres de l’amitié”. (Friendship venues)

The winner is the team who gained the highest amount of points at the end of the two periods of the game.

Periods of the game :

Start of the game :

The first obstacle runway for each team will be select at random.

The game starts with the pull fighting using the rope.

Players of each team are staggered alongside each side of the rope, lying on the ground.

The other team has first to turn all around the baseball field before reaching the other obstacle runway.

In the specific configuration for this 70th Anniversary, the two obstacles runways are places in parallel to each other, at the backside of the baseball field (as seen from the bar). Each obstacle runway includes 5 obstacles + a handicap to practice mutual assistance :

For one of them, all the team will have to pass the 5 obstacles carrying a long and heavy trunk (Should be carried by everyone).

On the other one, in addition to passing the 5 obstacles, each team member will have to climb and touch with one hand the horizontal bar of the rugby goal, at 3m high (Mutual assistance will be needed to achieve it so that each member succeed, in perfect security).

Ball game in the field :

The objective of this ball game is to gain as many points as possible for the team. A point is gained when the team succeed is placing the ball in the basket + getting the ball back out of the basket + go and score the point on the board. Only when these 3 steps are achieved.

Rules of the ball game period :

When entering into the field, the fastest team has to go and get the ball in the appropriate pick up zone, without touching the ground. When failing, the team should try again as many time as necessary.

As soon as the ball is picked up, the game starts and the team playing in the field can start scoring points.

When a player got the ball in hands, s.he cannot move more than 3 steps (prepare a ball passing) and should not keep the ball more than 5 seconds. The decision of the referee has priority. If a player do not respect this rule, a player from the opposite team will put the balll back into play at the place where the fault was done.

No one can touch the ball when a player got it in his hands. It is also forbidden to touch the other players. When the referee should call for a fault, the opposite team get a free throw (and one more for each additional one : first time, one free throw ; second time, two, etc.). In the case that two players got the ball in their hands at the same time, the referee will put the ball back in play by a vertical launch between the two teams.

The goal of the game is not only to gain as many successful shooting hoops,  but also penetrate in the opposite camp with the ball at the appropriate location. Score an essay is the best way to stop the ball game.

By succeeding in placing the ball on the « throne » of the opposite team, your team gains 2 points and can leave the ball field by the closest “mouse hole” (balancing) to get to the second obstacle runway.

The other team (that did not score the essay) must go and get the ball from its throne, and place it back to its pick up zone, ready for the second period of the ball game. Only after this are they allowed to exit the field by the “mouse hole” of the opposite team (quadrupedy), to get to the other obstacle runway.

In case that none of the two teams scored an essay, the referee whistles the end of the game after maximum 10 minutes. These 10 minutes are starting when the second team entered completely in the field (when the last team member got through the “mouse hole”).

During the first period, in case that my team is gaining a lot of points, we should continue to score as much as possible.

If it is the contrary and my team do not have a lot of points, it may be interesting to consider scoring an essay (placing the ball on the throne of the opposite team).

During the second period, in case that my team has already got a lot of points, we should probably try to score an essay as fast as possible to avoid the opposite team to gain any points.

But is my team do not have a lot of points yet, we should try to play as long as possible to score points, trying to avoid the opposite team to score an essay and try to get more points to win.

End of the first period :

The first period of the ball game ends either when an essay is scored by one team, or when the referee stops the game.

In case an essay has been scored, the team who scored it is passing through the other “mouse hole” then the one they used to enter in the field, to go to the other obstacle runway than the one they did before entering to the field.

The team that did not score the essay needs first to get the ball back in place at its pick up location (without touching the ground outside the limits of the field !), and only after it, pass through the opposite “mouse hole”, and go to the opposite obstacle runway.

If the referee whistles the end of the game after 10 minutes, the game stops. The ball gets back to its pick up location. All the players are joining in the center of the field forming one line. At the signal of the referee, all players are running to the “mouse hole” they should use if they were to score an essay (balancing of the opposite team).

The second period is identical to the first one, but each team changed side. They passed the opposite obstacle runway, and are to score an essay in the opposite camp.

The game ends when an essay is scored during the second period of the ball game, or after 10 minutes (starting when the last team member of the last team entered through the “mouse hole”)

The winning team is the one who scored the maximum number of points (The 2 points of the essay are added to the points gained during the game).

In case that the two teams have an equal number of points at the end of the two periods, the game continues around the basket (further than the 10 minutes) until one of the team scores one additional point, making her the winning team.

Orange : the ball game field. The basket is in the middle, presented in white.

Red : one of the obstacle runways (the one in which each team member will have to climb and touch with one hand the horizontal bar of the rugby goal, at 3m high). The red mouse hole and throne are indicated by the red mouse and crown.

Blue : the other obstacle runways (all the team will have to pass the 5 obstacles carrying a long and heavy trunk together). The blue mouse hole and throne are indicated by the blue mouse and crown.

The ball pick up zone is indicated by the white ball upon the field.